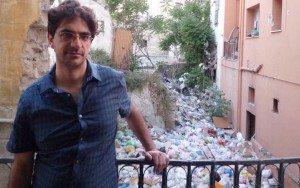 I want to take the audience in a journey into the waste, experiencing together what I have been experiencing in my life both in Palermo and Paris. In order to understand the plot, we can divide it into three steps, which are fundamental steps for any  environmentalists: critical information, awareness, individual and collective action.

As a citizen of two very different cities – I’ll start comparing their dealing with waste.

In Palermo , the AMIA, the company in charge of the waste management, is going bankrupt and has been accused of false accounting. Besides that, refraining from developing the separate collection of waste, it seems to deliberately accelerating the filling up of the local dump (Bellolampo). This may be due to the fact that AMIA has a vested interest as a shareholder in the future project to construct a mega incinerator on the outskirts of Palermo city.

In Paris the situation is very different, almost the opposite. The Municipality gives very detailed instructions on waste collecting, but gives very little information on incinerators.

In the second part (the awareness), I’ll try to understand – going over the news and the appearance – what we can consider as waste. Waste is “unwanted or unusable materials ». (Wikipedia)

The goal of this society is not to produce real goods but things that can be rapidly transformed into waste, in order to leave some room for other consumer items.

For supporting this economical development based on consumerism, this society operates a perverse effect, well hidden behind the cycle to buy-to throw: the transformation of individual goods in a whole community’s problem. This is what I call “the trick of waste”. Just before this conjuring trick, when we buy an item and we use it, we say it is “mine” and it belongs just to me. Later, when we don’t need it anymore and we throw it away, for some strange reasons it doesn’t belong to us anymore but it becomes a community charge and damages the environment.

Back to Paris from Palermo, where garbage invades the streets, I guess the solution could be in France, where everything is supposed to work well, public spaces are clean and modern enlightenment’s spirit reigns.

But now, I no longer see things in the same way. Now I’m no longer satisfied with my garbage “disappearing” from my house. Now I also want to know where it goes.

I join a meeting of the CNIID, an independent association campaigning for the reduction of waste at the source and its toxicity, and I realize that organic waste collection is dramatically absent from the apparently efficient waste separation in Paris. I also “find out” the evil policy of incinerators, which requires to produce garbage.

Sébastien Lapeyre, CNIID’s young director talks to me about his battles, along with the Collectif 3R, struggling against the new project of Ivry sur Seine incinerator. Together they developed an alternative plan to the one of the SITCOM, the company that runs incinerators in Paris region (Ivry, Issy les Moulineaux, St Ouen), but the battle seems lost.

I immediately sympathize with Sébastien: we see waste in the same way, we are against greenwashing and the industrial policy which pretends to sell us fictitious recovery as a natural process when it’s not , and we are rather in favour of degrowth.

I talk to some of my old friends, and discover that they are dealing with garbage and incinerators, too.

So, even in Paris, I enter the small world of “garbage-obsessed”, a group of ecologists who are fixated with the idea of how everything can be transformed into waste or not.

Therefore , not even in France things work according to real ecological principles, and this efficiency is hiding a business, cleaner than the Mafia one, but always anti-ecological.

So what do the cleanness of Paris and the dirt of Palermo have in common? Behind two different appearances, there is still a business. From the Italian side, as everyone knows, there is the speculation of the administration and the Mafia; from the French side, the “clean” business of incinerators. In both cases, the aim is not the respect of the cycle of the objects and the nature … but to make money.

These discoveries and considerations lead me to change my daily behavior in Paris ..
I promote the composting in the building where I live, I go to the organic market, instead of the supermarket.

As an expert in waste management, he has been travelling around the world to spread out his revolutionary approach and convince people that his Zero Waste strategy is more appropriate than the incinerators.

We will take part to one of the conferences that the American professor has held at the Engineering dept. in Palermo, and then we’ll privately meet him to discuss two of his many subjects which his philosophy is based on: “Wastes are a system error” and citizen’s responsabilization. This strategy – provocative and tangible – has also been included in President Obama’s political program.

In the third part, I’ll move from theoretical knowledge to individuation of alternative experiences and individual action.

In Sicily I’ll meet many environmental groups (No incinerator committee and Zero Waste network group). I’ll also analyze some “trivial” experiences linked to the low class ancestral culture in Sicily, which have recently been reconsidered as reliable. I’ll also follow some events, sometimes tragic events, related to a typical Sicilian phenomenon: the second-hand dealers and their fight led by Gabriele Dulcetta, a brave and strong leader (APAS cooperative).